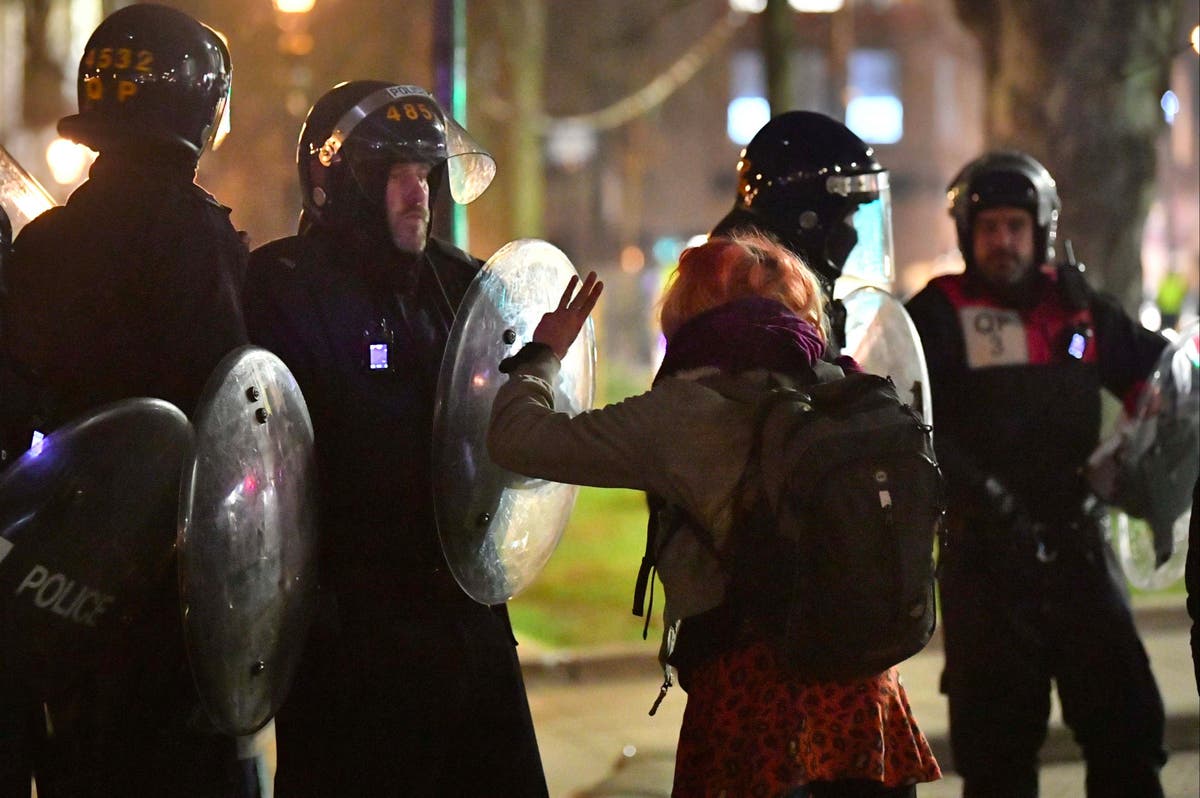 Specially trained public order officers were deployed on Tuesday night to College Green, where police said around 130 people had gathered earlier in the evening.

Officers wielding batons and shields could be seen breaking up activists, with footage showing some clashes breaking out between protesters and police.

Avon and Somerset Police tweeted at about 12.30am that three arrests had been made, with the force adding the dispersal operation was ongoing.

It was the latest “Kill the Bill” protest in the city against theGovernment’s Police, Crime, Sentencing and Courts Bill, which will seethe police handed new powers to tackle demonstrations.

Avon and Somerset Police said officers had attempted to engage with demonstrators and asked them to move on.

The force tweeted: “Specially trained public order officers are beginning to disperse a protest from College Green in #Bristol.

“Officers had engaged with protestors & asked them to move on but tents & a sound system were set up.

“We remain in lockdown and we cannot allow this gathering to continue.”

Chief Superintendent Claire Armes earlier said that “all necessary and proportionate enforcement action will be taken”.

A YouTube livestream appearing to be from the demonstration showed large numbers of police with some officers on horseback and others with dogs.

Shouts of “Our streets” and “Shame on You” could be heard.

Meanwhile, police investigating a riot that marred a “Kill the Bill” protest in Bristol on Sunday have released images of 10 people they wish to trace.

Violence had erupted in the city centre at the weekend, which saw a police station attacked, 21 officers injured and vehicles set alight.

Seven men, aged between 20 and 44, were arrested on suspicion of violent disorder and have all been released under investigation.

A 28-year-old man, from the Bedminster Down area of Bristol, has been charged with possessing an offensive weapon and appeared at Bristol Magistrates’ Court earlier.

He is next due to appear at the same court on June 10.

Around 3,000 people attended the peaceful demonstration on College Green on Sunday but events turned violent after around 500 people descended on the New Bridewell police station.

Detective Chief Superintendent Carolyn Belafonte said: “The investigation into Sunday’s disgraceful scenes of violence will undoubtedly be one of the largest in Avon and Somerset Police’s history.

“More than 100 officers and staff continue to work on the inquiry which is being led by our major crime investigation team.

“Hundreds of hours of digital material has already been reviewed and images of the first 10 people detectives want to talk to about Sunday’s events have been identified.

“Officers and staff are working their way through images and footage as quickly as they can but with more than two terabytes worth of CCTV footage as well as nearly 100 officers’ body worn video cameras and more than 100 videos already sent in by members of the public to review, this will take a considerable amount of time.

“We expect to release images of many more people in the coming days and ask anyone who recognises anyone to contact us.”

Andy Marsh, chief constable of Avon and Somerset Police, said the demonstration had been “hijacked” by several hundred “extremists”.

Bristol mayor Marvin Rees, who said he had “major concerns” about the Government’s Bill, condemned the thuggery but said the disorder would be used to justify the legislation.

The Police, Crime, Sentencing and Courts Bill would give the police in England and Wales more power to impose conditions on non-violent protests, including those deemed too noisy or a nuisance.

Those convicted under the proposed legislation could face a fine or jail.