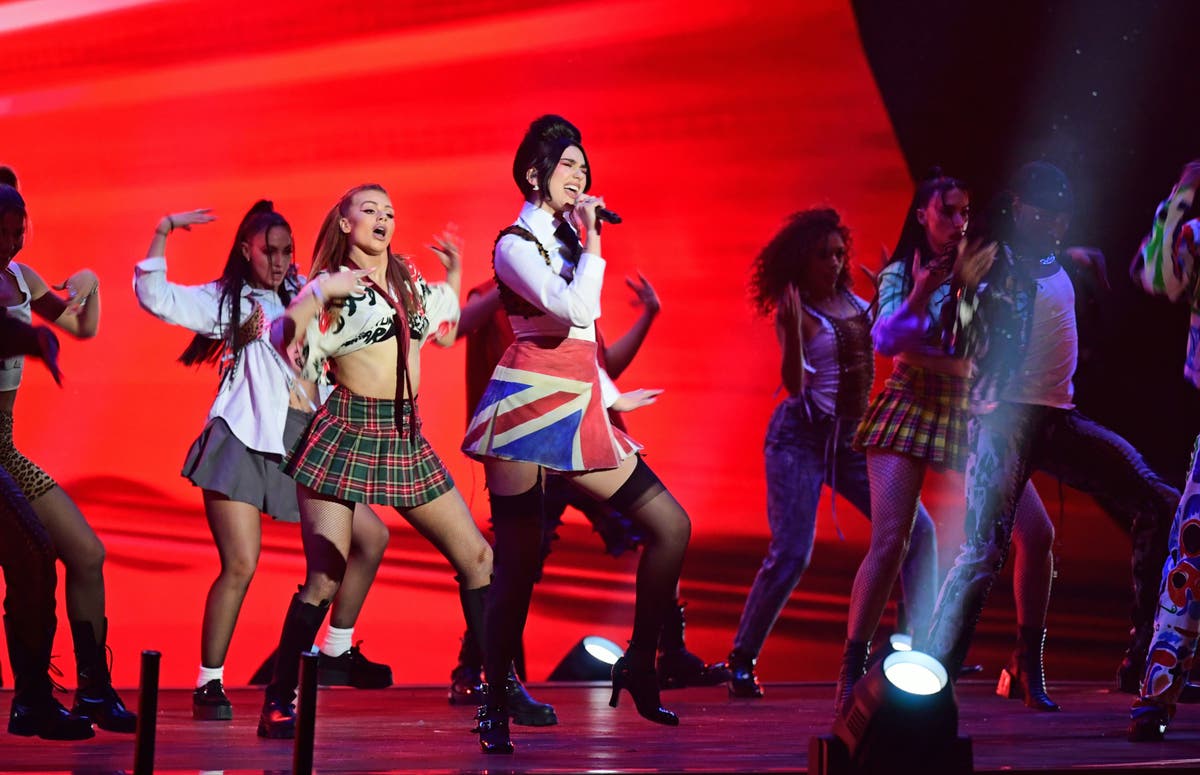 ome 2,500 key workers were among a 4,000-strong crowd at Tuesday’s Brit Awards at London’s O2 Arena in the first live music show at the venue in more than a year.

Arlo Parks and Headie One performed inside the venue.

See below for live updates on the event, as it happened…

Rag’n’Bone Man and P!nk closed the ceremony with a performance of their song Anywhere Away From Here.

The pair performed alongside the Lewisham & Greenwich NHS Choir.

And that’s it for tonight. Thank you for joining us.

She dedicated her second award to Folajimi Olubunmi-Adewole, known as Jimi, who died attempting to save a woman from the Thames last month.

Lipa said recording the album had taught her “love and friendship” and thanked the songwriters, producers and artists she worked alongside.

After being given her trophy, Swift said: “I’m really, really proud to be part of this musical community, especially in a year when we all needed music so much.

“But what we needed even more was the help and support that we got from the NHS and the key workers who are here tonight.

“Thank you for everything that you have done for us.”

Headie One stuns with incredible performance

Headie One has given a politically charged performance of his song Ain’t It Different with fellow rapper AJ Tracey at the Brits.

In his acceptance speech, Harry Styles said: “I continue to be baffled by moments like this.

“They make me more and more incredibly grateful to get to do this every day.

“I’m really happy to be here and proud to be celebrating British music tonight.”

The Spice Girls applauded the win on Twitter, saying: “Congratulations @LittleMix Doing it for the Girls!!”

Girls Aloud star Nicola Roberts wrote: “My girl band heart is so happy @LittleMix have just won best band @BRITs !!! The first girl band to ever be awarded it! Proud of you ladies !”

The former First Lady made a surprise appearance via video link to announce that The Weeknd had won International Male.

She praised him for his charitable work as well as for providing “a light that is pretty blinding and giving us all a reason to dance”.

Here is a clip of the man himself – who beat Tame Impala and Bruce Springsteen to win.

Years And Years frontman Olly Alexander and Sir Elton John performed a version of the Pet Shop Boys’ 1980s hit It’s A Sin, inspired by the Channel 4 TV series of the same name.

The pair were joined on stage by drag queens while Sir Elton’s husband David Furnish delivered an introduction highlighting the work of the Elton John Aids Foundation.

Olly was in the crowds at the Brits – and celebrated the showing of the pre-recorded performance.

Here are some images from the performance.

Following on from her amazing performance earlier in the night, Dua took home best female.

She dedicated her award to Dame Elizabeth Anionwu – a nurse and professor of nursing at the University of West London.

In a heartfelt speech, Lipa praised NHS workers – suggesting they should be given a payrise following their work during the pandemic.

She said it is “very good to clap for them but we need to pay them”.

Lipa added: “I think what we should do is we should all give a massive, massive round of applause and give Boris a message that we all support a fair pay rise for our front line.”

Lipa also said she was “so proud” to see more women being recognised at the Brit Awards.

She also spoke about being one of a wealth of women nominated across the board this Brits.

“It is an honour to be part of this wave of women in music.”