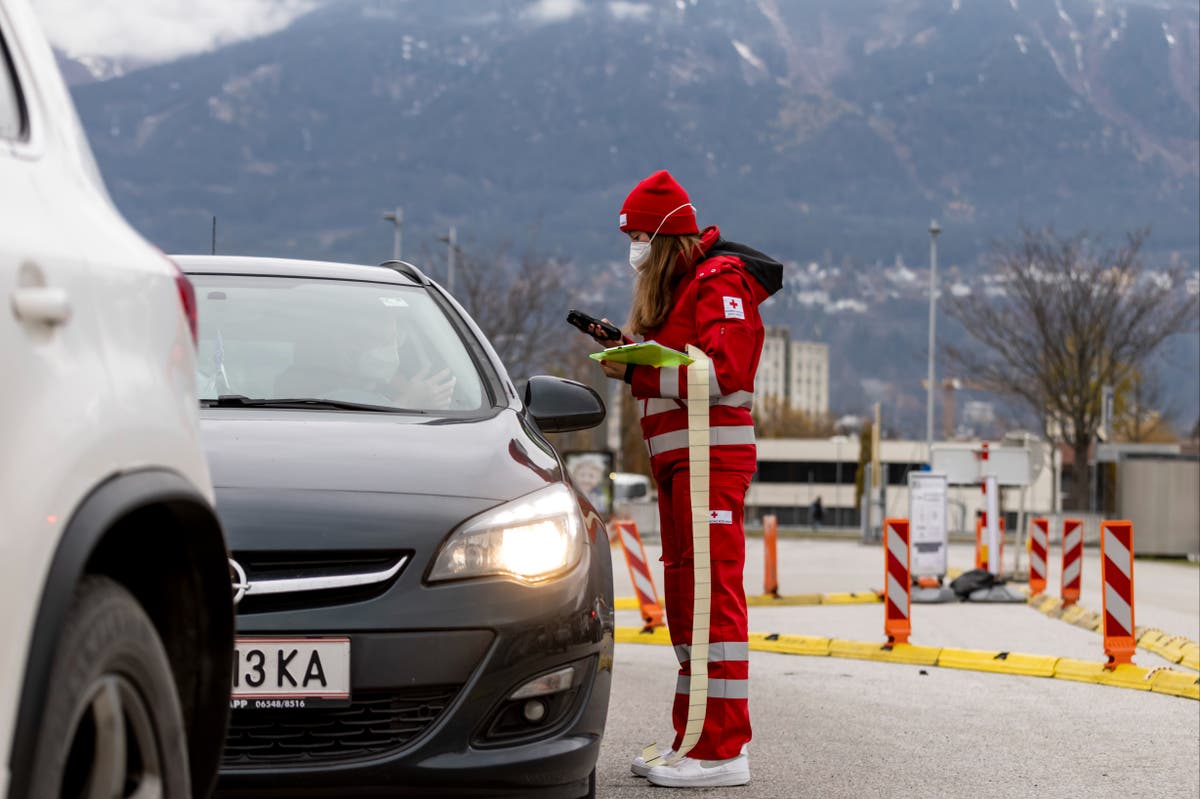 What’s going on in Austria?

Those who cannot prove they have been vaccinated, or have had a recent negative Covid-19 test, are now barred from leaving their homes except for limited reasons such as essential shopping, to go to work or school or to exercise.

Some exemptions apply including children under the age of 12, who cannot be vaccinated, as well as teenager taking part in Covid-19 testing programmes at school.

The lockdown will initially last for 10 days and is to be enforced by police, who will conduct random spot checks by asking people to produce their vaccine pass or certificate of recovery.

Austria recorded 14,416 infections on Wednesday, just two days after entering the lockdown, in a new record.

What do experts think?

UK public health experts have dismissed a lockdown for the unvaccinated, claiming such a move would be coercive, unenforceable and would not drive down infection rates.

Professor Stephen Reicher, a member of Sage’s subcommittee advising on behavioural science, says implementing an Austria style lockdown in the UK could end up alienating already hard to reach parts of society and create more problems down the line.

He said: “If vaccine passports are intrusive enough, [such as being] necessary for everyday activities, it leads to a perception that vaccines are coercive and that can both undermine trust in government and increase resistance.

“We’ve seen that in a number of countries, we have data to suggest that would be the impact in the UK as well.”

Professor Reicher, of the University of St Andrews, says this can end up being “counter-productive” and cause so much resistance that it may undermine other efforts to stop the virus from spreading.

He continued: “Even if you apply so much coercion that those who are distrustful do get vaccinated, the danger is that you undermine everything else that they might do.

“They become so anti-authority that they are far less likely to do any of the other things asked of them to keep themselves and others safe.”

He warned this strategy would “store up trouble” and “create a pool of people who are alienated and anti-authority through that form of compulsion.”

Professor Reicher said an Austrian style lockdown in the UK would also be difficult to enforce.

“You either have a strict scheme, which alienates people and probably undermines human rights, or you have a looser scheme which then becomes a practical nightmare.

At least Austrians are asking what to do…. in Britain, we are just wishing it away

“But having said that, I don’t want to be all negative. At least Austrians are asking what to do about [their] incredibly high levels of infection and in Britain, we are just wishing it away.”

Devi Sridhar, chair of global public health at the University of Edinburgh, said she would like to see other measures implemented before a lockdown for the unvaccinated, such as legally mandated mask-wearing and vaccine passports for indoor venues.

She said: “My hope in the UK is that before we go down that route we could be doing other things like masks. A new study has shown that masks can lower transmission by 56 per cent.”

Despite mask wearing being an “easy tool” in the fight against Covid-19, Professor Sridhar was concerned that it would be more difficult to implement in England “because you’ve released it, so to reintroduce it is quite tricky”.

She explained: “Whereas in Scotland we’ve just had it so people are used to it so compliance is quite high. I don’t know in England how compliance would look with that.”

Professor Sridhar said that action could be taken now to avoid a lockdown.

“I wish there would be getting ahead of this issue rather than waiting and watching, which again we seem to be in the situation of, ” she added.

David Matthews, a Professor of Virology at the University of Bristol, thinks the issue is fairly nuanced and its success would depend on how it is implemented and enforced.

He told the Standard: “The question of an Austrian style lockdown – and if it would have an effect here – highly depends on whether or not people would comply with it or not and whether that would improve vaccination rates.

“If it improved vaccination rates, it absolutely would have an effect.”

Professor Matthews continued: “I totally understand why Austria is doing what it is doing, I’m just not convinced that’s the most effective way forward for us.

“The situation they have got in countries like Austria is different because they’ve got a much, much lower vaccination rate.”

Around 65 per cent of Austria’s population is fully vaccinated, one of the lowest rates in Western Europe.

Instead of following an Austria style lockdown, Professor Matthews says he would prefer to see a “more concerted campaign” in the UK to get the last 10 per cent of people vaccinated.

He says this would halve the number of Covid-19 patients in hospital, as well as halving the number of people on mechanical ventilation beds and easing pressure on the increasingly strained NHS.

Christina Pagel, who is a professor of Operational Research at University College London and a member of Independent Sage, believes the whole idea of an Austrian style lockdown is a non-starter.

“I don’t think it makes any sense”, she said.

What is the current situation in the UK?

Boris Johnson said: “A new wave of coronavirus is steadily sweeping through central Europe and is now affecting our nearest neighbours in western Europe.

“We don’t yet know the extent to which this new wave will wash up on our shores but history shows we cannot afford to be complacent.”

The government is currently pursing Plan A for dealing with Covid-19 this winter, which involves giving out booster jabs to the over-40s and vulnerable groups, as well as vaccinating children.

However, if deaths and hospitalisations from Covid-19 increase the government might be forced to implement its Plan B strategy, which involves making masks mandatory and introducing vaccine passports for nightclubs, crowded indoor and outdoor settings and any event with more than 10,000 attendees.

Under Plan B, the Government said it would also consider asking people to work from home again.

What the papers say – November 4