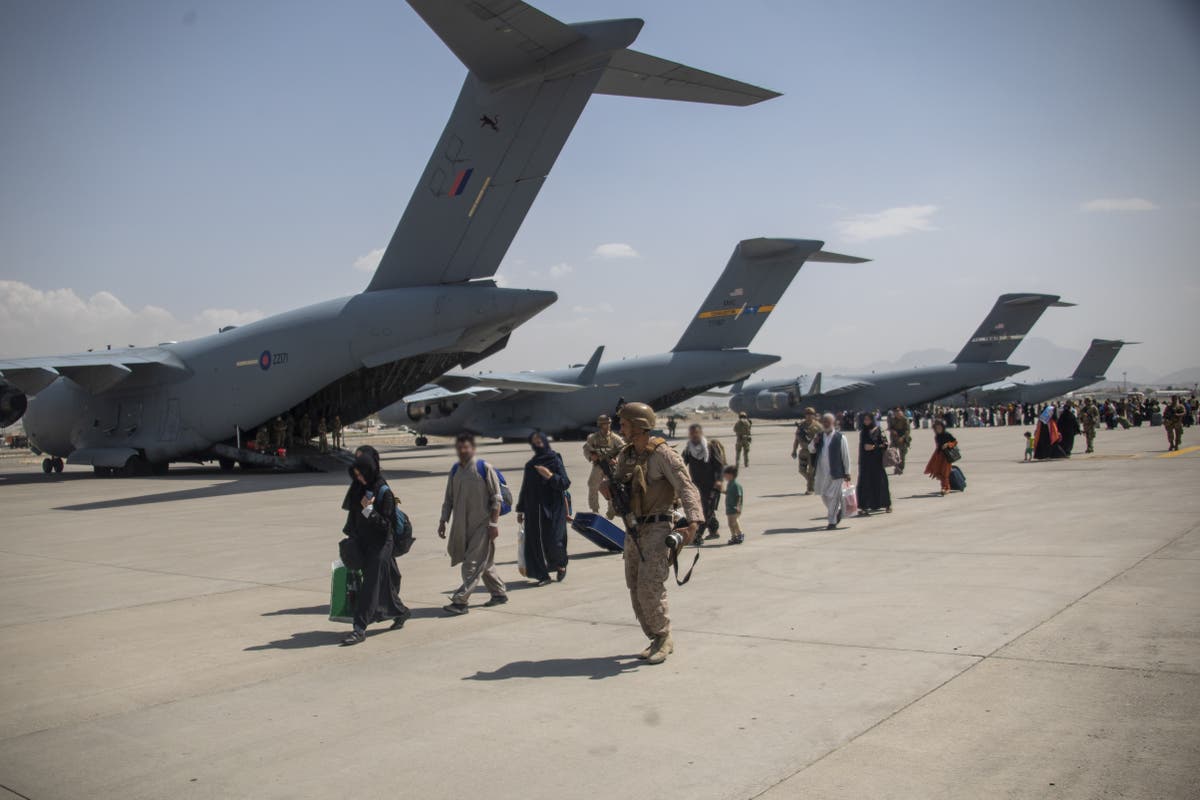 n extension to the deadline for pulling out remaining troops from Afghanistan to allow evacuations to continue is “unlikely”, the Defence Secretary has conceded ahead of emergency talks with Joe Biden.

Ben Wallace expressed pessimism on whether the August 31 withdrawal date will be put back as he cited the US President’s reluctance and warnings of repercussions from the Taliban.

Boris Johnson will host a virtual G7 summit on Tuesday afternoon during which he is expected to press Mr Biden to keep his troops in the Afghan capital for longer.

But the Taliban, which swept to power last week in the wake of America’s major withdrawal of troops, suggested that foreign forces remaining past the deadline would cross a “red line” that will “provoke a reaction”.

Acknowledging that “we’re not going to get everybody out of the country”, Mr Wallace expressed pessimism about the prospect of the evacuation operation from Kabul airport continuing after August 31.

“It is definitely worth us all trying and we will.”

Britain has evacuated 8,600 people from Afghanistan in the past 10 days, including more than 2,000 in the previous 24 hours, according to the Defence Secretary.

Mr Wallace has insisted it would not be appropriate to try to secure Kabul airport with British troops after the US pulls out.

“It’s not about effectively whether I could fly in thousands of troops and secure the airport.

“Yes I could do that, I could probably secure the airport for a few months, or maybe a year or two,” he told BBC Radio 4’s Today programme.

“But for what purpose? For them to be shot at, attacked, people not to get to the airport and to trigger just a permanent fight? I don’t think that is a solution.”

Mr Wallace envisaged the “consequences” threatened by the Taliban of missing the deadline to leave could range from preventing people going to Kabul airport to “military activity that could potentially close the airport”.

The Prime Minister spoke to Mr Biden on Monday evening ahead of the G7 leaders’ call, which will also include the general secretaries of Nato and the United Nations.

“The Taliban will be judged by their deeds and not their words,” the Prime Minister added.

Mr Johnson has promised “to use every humanitarian and diplomatic lever” to protect human rights in Afghanistan.

Leaders of the G7, which also includes Canada, France, Germany, Italy and Japan, are further expected to discuss aid and the burgeoning refugee and humanitarian crises.

Ahead of the summit, six chairs of foreign affairs committees in G7 parliaments issued a joint statement urging against “arbitrary dates” for ending military support for the evacuation.

Signed by Bob Menendez, a US senator in Mr Biden’s Democratic Party, and the senior Tory MP Tom Tugendhat, they also urged against “artificial caps on the number of evacuees”.

Sir Mark Lyall Grant, a former national security adviser, said it was “totally unrealistic” to think there could be an extension to the deadline without the Taliban’s consent.

“The Taliban could stop this evacuation process in one hour’s time if they started firing missiles at departing planes, if they lobbed a mortar into the airport, so this evacuation is happening with the cooperation of the Taliban,” he told BBC Radio 4’s World at One.

Foreign Secretary Dominic Raab said in an article for the Telegraph that the UK will “use all of the levers at our disposal, including sanctions, aid and access to international finance system”.

Shadow foreign secretary Lisa Nandy said Mr Johnson must use the G7 call to “step up and demand” the extension past August 31, secure a pact to “deal with the unfolding refugee crisis” and develop a strategy to support those left behind.

“The Prime Minister has had 18 months to plan for this, the world’s eyes are on tomorrow’s meeting to make the next seven days count,” the Labour MP said.