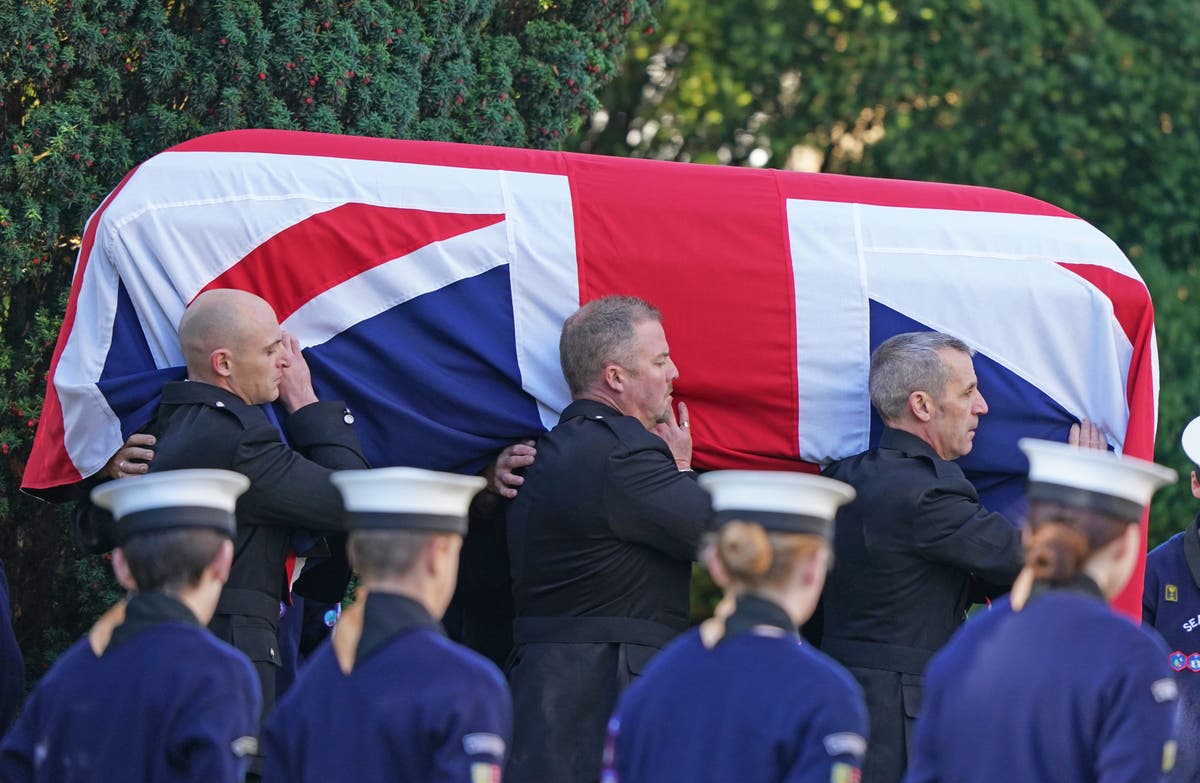 ourners gathered at the funeral service for MP Sir David Amess on Monday afternoon in his Southend West constituency on an “incredibly emotional day” for the city.

The family of the father-of-five, who was stabbed to death while holding a constituency surgery at Belfairs Methodist Church in Leigh-on-Sea on October 15, called on Britons to “show kindness and love to all” as the memorial service began.

Locals lined the streets of Southend and applauded as a hearse carrying Sir David, draped in the Union Jack, was driven to St Mary’s Church just before 1pm. Pall bearers from Southend Fire Service carried the coffin the short distance to the church as they were saluted by members of 3rd Chalkwell Sea Scouts.

The funeral service, led by Reverend Paul Mackay and Rev Monsignor Kevin William Hale, is strictly by invitation only.

In a emotional statement, Sir David’s family said their “hearts are shattered” and asked people to “set aside their differences and show kindness and love to all”.

“This is the only way forward. Set aside hatred and work towards togetherness,” said the family statement, to be read by the former MP Ann Widdecombe.

“Whatever one’s race, religious or political beliefs, be tolerant and try to understand. As a family, we are trying to understand why this awful thing has occurred.

“Nobody should die in that way. Nobody. Please let some good come from this tragedy. We are absolutely broken, but we will survive and carry on for the sake of a wonderful and inspiring man. “We ask at this time that the family’s privacy be respected so that we can grieve in private.”

Sir David’s friend and colleague Mark Francois will also deliver a eulogy at a private ecumenical service. Earlier on Monday, the MP for Rayleigh and Wickford admitted he had “mixed emotions” as he prepared to address mourners.

As he arrived at the church, he told reporters: “We’d all rather David was still with us. But this has been an opportunity for the whole of the community of Southend to come together and to pay their respects.”

Following the service, a horse-drawn hearse will carry the casket on a procession through Southend. It is due to pause outside Southend’s Civic Centre and again outside Sir David’s constituency office, Iveagh Hall, before returning to the chapel of rest.

On Tuesday, a Requiem Mass will be held at Westminster Cathedral in London, where a message from the Pope is to be shared.

He said that Sir David’s family “understand there are many others in the city who knew and loved him”, and have agreed for the service to be broadcast on local radio station BBC Essex.

Mr Gilbert said people can pay their respects to Sir David by lining the streets as the hearse passes and by writing in the book of condolence at the Civic Centre before it closes at 7pm on Monday.

Sir David’s family have requested that, in lieu of flowers or other tributes, donations are made to the charities that he supported.

These include The Dog’s Trust, The Music Man Project, Prost8, Endometriosis UK, and the Dame Vera Lynn Memorial Statue.