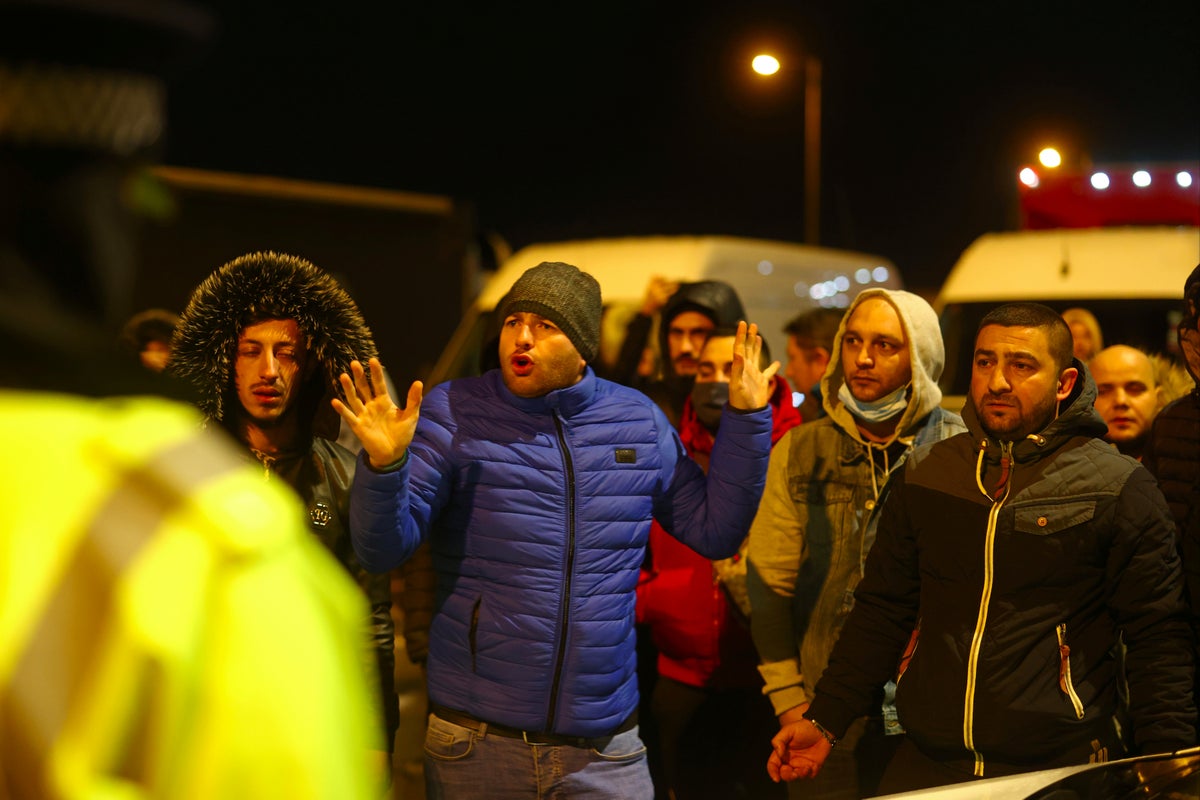 More than 6,000 HGVs are being held in Kent with some facing a fourth night in their cabs since the border was temporarily closed on Sunday night.

Grant Shapps said work continues to “get traffic rolling”. However, the Transport Secretary added that drivers needed to “follow instructions” from British officials in order to leave.

Mr Shapps told the BBC: “The issue is just the logistics of people following the instructions and making sure we can keep the port clear in order that we can get the traffic rolling.

“The more that people follow the clear instructions the faster we can get this resolved.

“It will take a matter of days rather than weeks or anything else but there will be, I’m afraid, some patience required.”

He added the Government was providing “welfare” for the lorry drivers stuck at the border and would continue to do so in the days to come.

The disused airfield site at Manston has become the main testing centre for hauliers, with drivers required to self-administer the tests in their cabs under supervision.

Around 170 military personnel, including those from the 36 Engineer Regiment and 1 Irish Guards, are assisting with testing.

Adina Valean, the European Union’s transport commissioner, said she was pleased stranded trucks are now moving “slowly across the Channel” after Covid restrictions between France and the UK were lifted.

“I am pleased that at this moment, we have trucks slowly crossing the Channel, and I want to thank UK authorities that they started testing the drivers at a capacity of 300 tests per hour,” Ms Valean tweeted.

“I deplore that France went against our recommendations and brought us back to the situation we were in in March when the supply chains were interrupted.”

Kent Police said one man was arrested on Wednesday for obstructing a highway in Dover. A police car was also damaged during a disturbance at Manston, the force added.

There were 3,750 vehicles at the Manston site as of 6.15pm on Wednesday, along with 632 HGVs on the M20 as part of Operation Stack and 1,690 in Operation Brock, the Department for Transport (DfT) said.

On Wednesday, Kent Council leader Roger Gough told Sky News tensions between police and drivers had calmed down but added the situation remained “quite fragile”.

He added he expected the number of lorries entering the Eurotunnel to “pick up” rapidly.

France imposed the travel ban in response to fears about the spread of the more infectious coronavirus strain, which is spreading in the UK.

Hauliers must be able to show proof of a negative test result carried out within the past 72 hours in order to be able to cross into France.

All truck drivers, regardless of nationality, will be required to take a lateral flow test which can detect the new strain of Covid-19 and return results in about 30 minutes, the Road Haulage Association (RHA) said.

Those who return a positive coronavirus result will be offered a second PCR test to confirm the result, and if they test positive again they will be moved into Covid-secure hotel accommodation to self-isolate for 10 days.

Hauliers have been urged not to travel to Kent until further notice.