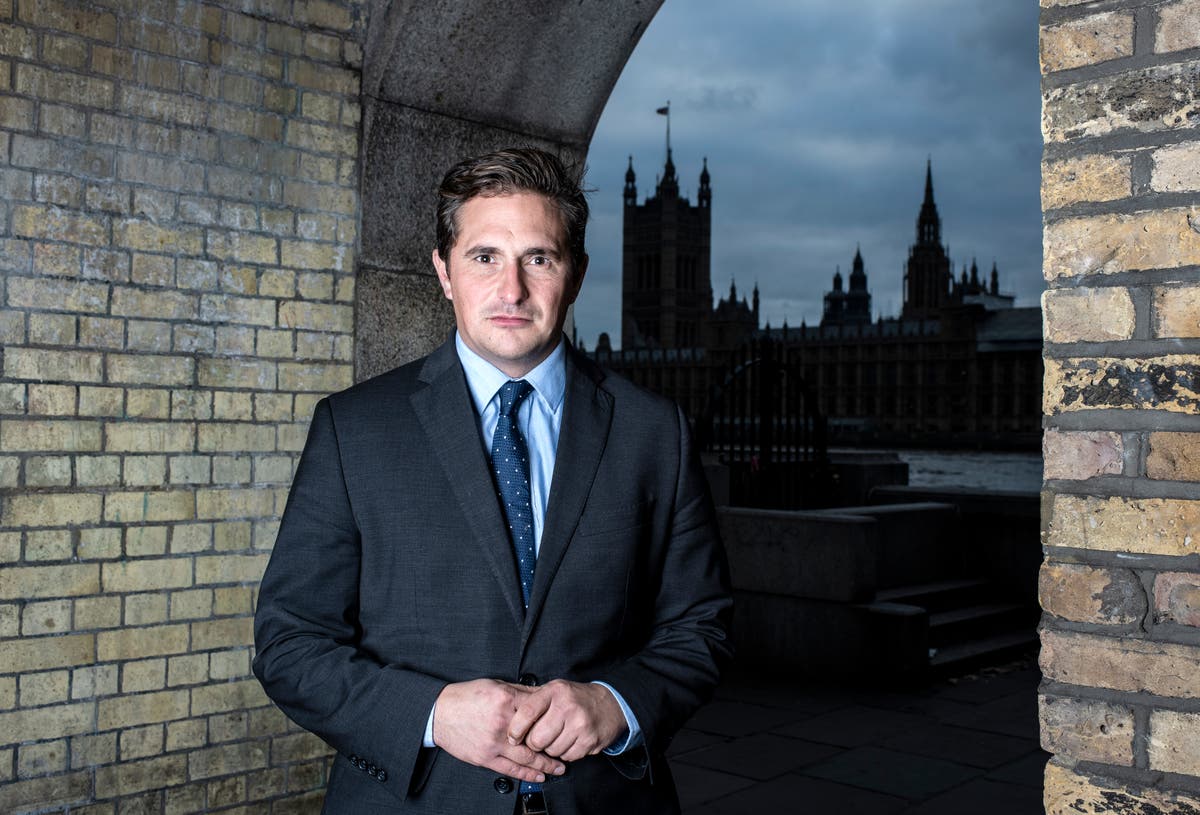 here will be a scorching contribution to the Commons debate on Afghanistan today from a man who served there as a soldier on three tours –  Johnny Mercer, former commando,  former veterans minister, just turned 40. The MP for Plymouth Moor View made his way to Westminster from the Isle of Skye where he’s been on holiday with his wife and three little girls in a rented caravan.

“I just want to get over to the Prime Minister how it feels as someone who obviously fought in that campaign, and more so for the families who lost sons or daughter or suffered horrendous injuries…how his conduct is felt in those communities”, he said, crouched in a grey hoodie, and still looking like a commando in civvies. “I think I’ve got a duty to get that over to him. I’ll focus on two things, one on service personnel and veterans, and two on nailing this narrative that it’s all America’s fault, because it’s a copout.”

Mercer, 40, has been surprised at how hard he’s been hit by the withdrawal from Afghanistan. “Obviously it’s a total betrayal” he told me on a wonky Zoom connection from a field outside his caravan – he’d been for a swim in a freezing loch and was still thawing out. “It’s worse than that because out of all the emotions you felt over the last 20 years of these campaign, defeat and surrender wasn’t really one of them. So it’s kind of new territory. And it’s really really difficult to process. To be honest, I’ve been surprised by how much it’s affected me, and a lot of my cohort – some pretty resilient people. I wasn’t expecting to feel like this.” Later he says sadly, “it all feels so pointless now.”

It’s the manner as well as the fact of withdrawal that makes him angry. “The way ministers have carried on over the last week, without any real direction or leadership or responsibility, it just makes it ten times worse. That’s why I shall speak out on it. Constantly blaming the Americans devalues our service even further”.

Could Britain could have done anything in Afghanistan, after the Americans withdrew?  “Absolutely!” said Mercer indignantly. “The guys who fought and died did not fight and die for an American flag. We went there as part of a UK mission, serving British interests and the British government, so for them to say that the Americans left, so we’re off…”.

He sounds angry now. “We’re not stupid; we understand they are the framework nation and it would be difficult to operate without them. We couldn’t have done it as a one-for-one swap, but what we could have done is much more than what we did. [The US] had two and a half thousand troops there, not a huge commitment, and with some application and some imaginative thinking, we’d have provided some sort of presence and fulfilled some of those roles in Afghanistan to make sure that our blood and treasure weren’t lost for nothing.”

In policy terms, where do we go from here?  Is there anything Britain can do now to contain the Taliban? “I don’t know”, he says hopelessly. “I don’t know what we can do in Afghanistan. And anything we try to do will be tainted by this failure.”

He is convinced that if the British had taken over some functions from the Americans, the situation “wouldn’t have happened the way it happened. What ministers are very keen to do now is blame America for everything. We were the second biggest troop contributing nation and we could have done so much more to protect our interests and our gains in Afghanistan and we chose not to, politically, and for me that is the unforgiveable nature of this. It was a choice by our current political leadership and for me that is beyond the pale.”

Constantly blaming the Amercians devalues our service even further

He sounds like an Army officer (and is currently under seige: “I’m just putting my hood up, because the mozzies [midges)] up here are something else”). He thinks his words carefully, even in the middle of a field and is politically savvy; he knows that there’s no appetite for large scale military engagement in Afghanistan, but what exasperates him is that even relatively small scale involvement was abandoned.

“If you’re going to develop the military from scratch, he says, “training people up in the specialist skills – special forces capability or warfare where you’re using jets and helicopters and not killing your own people – that kind of stuff takes a long time to learn and you need technical people to do it. These are the people that were there. We were having an exponential effect for very little cost, relatively speaking, at very low risk, and the guys we were training up were reaching the top of the organisation. And then it’s just gone. No air support, no engineering support, no nothing.”

“You know you bought into a mission and you gave your personal word and integrity, if you like: come with us, work with us, be our translator, work at the British base. And you do that on the basis firstly, you’re not going to lose, and secondly, yes, if things were to go wrong, you’d look after them.” In his first tour in Afghanistan in 2006, Mercer commanded a company of 32 Afghans.

“I persuaded them to fight”, he recalls, “and this was their country, and die in some cases…and for what? You could argue we’ve left Afghanistan in a worse position than 2001, before we went in. And that’s because people – the average age in the country is 18 – now have expectations of liberty that can’t now be fulfilled.” He is unequivocal that we need “clear routes for refugees”.

He looks wretched. When I ask him how he’s managing, he says laconically, “Lucky I’ve started smoking again in the last few days. We’ve had the Plymouth incident on the Thursday” – he’s MP for the constituency neighbouring the one where the mass shootings happened – “then we’ve had this collapse in Afghanistan over the weekend, and it’s been without a shadow of a doubt one of the hardest professional period I’ve had since I served in Afghanistan, so I make no bones about it: I’ve found it incredibly difficult and in this job, there is no support structure whatsoever.”

The Plymouth shootings were, he said, “very difficult, just an awful situation. This was unspeakable, and I’ve worked hard to make sure support structures are in place. Fortunately, this is very rare but grotesque violence…it’ll take a while for the community to recover from that.”

I ask him whether he drew any conclusions about the wisdom of the police renewing the killer’s gun licence. “No, absolutely not”, he said firmly. “And I don’t think anybody else should either. “I think we should let the investigation take its course. There are police forces up and down the land who are taking licences away and giving licences back to people who keep guns. It’s standard work. I’ve got the highest confidence in the Devon and Cornwall police and a brilliant relationship with the Chief Constable. Let’s wait and see what actually happens rather than prejudging all this stuff.”

Interestingly, he says that the only person who called him up to ask if he was all right was, of all people, Ian Blackford,  SNP leader in Westminster. “I thought that was very nice, but not a single member of the Conservative Party phoned me up”.

That seemed odd; you’d think that his colleagues might be glad to learn from his experience in Afghanistan. “It doesn’t work like that”, he says. “What’s going on now is indicative of how we do politics. If you exclusively promote talent to important positions based on sycophancy to the leader and their controllability from the centre rather than those who are really going to inspire people and have some degree of expertise in what they’re doing, that’s ok, it’s all ok and it’s all funny and we make programmes like Yes Minister and it’s all ok until you hit a crisis, which is what Afghanistan is.

“And when that happens, and you need departments to function and you need leaders to lead and they’re not in place…in this stuff, it costs lives. Our failure to relocate Afghans who worked for us will result in them dying. Whatever you come into politics for, it’s not that.”

He was unimpressed by flawed assessment of the situation by the Chief of the Defence Staff, General Sir Nick Carter, on the Andrew Marr Show before the collapse. “It’s all part of the system where everyone’s just looking upwards all the time and telling the Prime Minister what he wants to hear. The whole time. Whether it’s Number Ten around the Cabinet Table or whether it’s in the departments.”

So…the problem with Boris’s administration is that the PM listens to what he wants to hear? “Absolutely”.

If he sounds bitter, he is bitter. He was minister for veterans and service personnel but Boris sacked him for disagreeing with the Government’s policy on pursuing British soldiers for alleged historic offences in Northern Ireland without new evidence of wrongdoing. After that, he says, colleagues ostracised him.

“I have no friends in politics”, he says. “It’s a deeply lonely place…I’m sick of doing all this [working for veterans and soldiers] for a Conservative Party and a government that treats me with contempt.”

Given all this, does he still want to continue as a Tory MP? “I’m not going to lie to you; it’s something I think about every day”, he says. “Being in a Tory Party at the moment is like working for a really shit company where everyone takes the piss out of you and everyone running it hasn’t got a clue.”

Today’s debate will vindicate his presence in parliament. Boris won’t like his speech, but he should reflect that if someone like Mercer had been in government rather than out of it, things might have turned out differently.