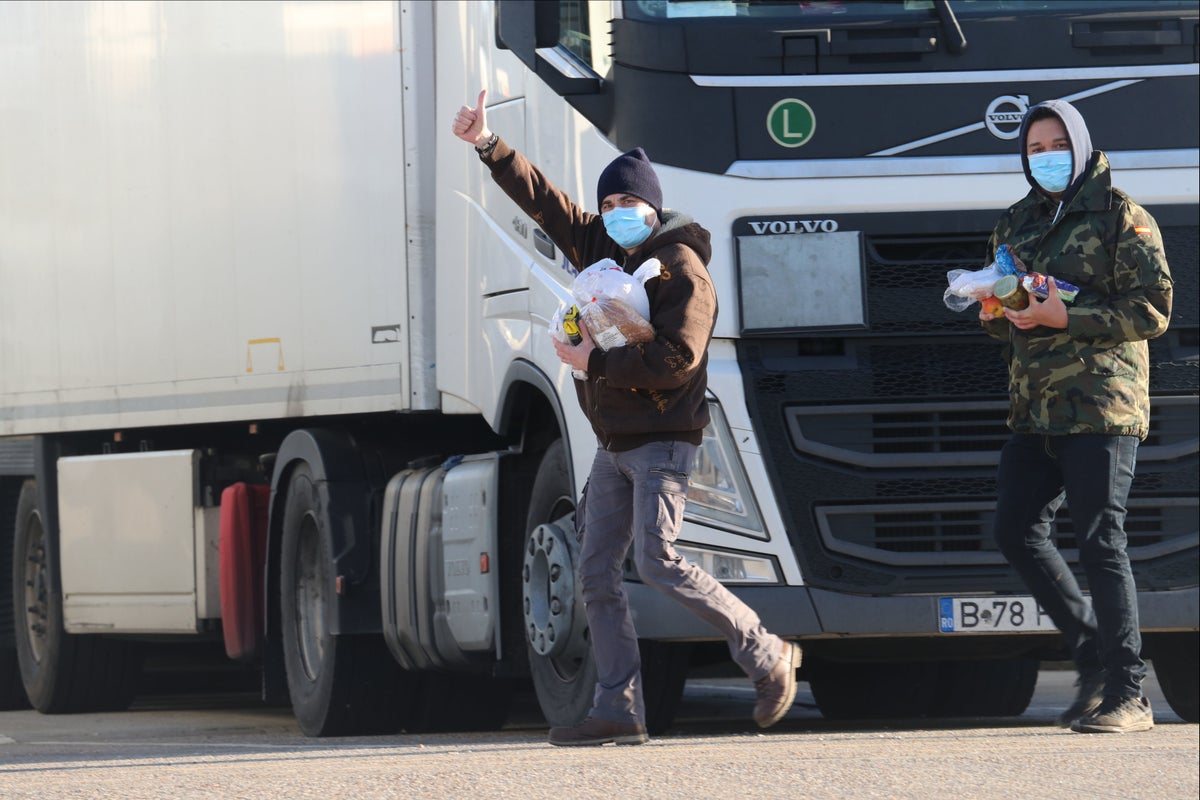 ore than 10,000 coronavirus tests have been carried out in a bid to clear the backlog of lorries waiting to cross the English Channel into France on Christmas Day.

Some 1,100 military personnel have been deployed in Kent as part of the repatriation operation, after French Covid-19 restrictions caused severe disruptions at the Port of Dover.

The Ministry of Defence said about 4,500 trucks had crossed the channel as of Friday afternoon, but added that more vehicles continue to arrive “every hour”.

France’s demand that drivers show proof of a negative Covid-19 test before entering the country forced thousands of international hauliers to spend Christmas Day in their cabs.

The French closed their border last Sunday following the discovery of a fast-spreading mutant Covid-19 strain in the UK, before easing restrictions on Wednesday.

More than 3,160 hauliers were waiting to cross the Channel on Friday evening, despite some progress in testing drivers in their vehicles at nearby Manston Airport, on a closed section of the M20, and in the town of Dover itself.

Some have already spent nearly a week stranded due to the diplomatic impasse.

Transport Secretary Grant Shapps said more than 10,000 tests have been carried out so far, of which 24 returned a positive result.

Mr Shapps said: “The British Army is again showing why it is world class, ramping up testing and feeding hauliers stranded by the Covid restrictions, while helping oversee the operation in Kent.

“But let’s not forget the tireless effort of the police, civilian testers, council planners and port and ferry workers.

“These thousands of people, military and civilians, have given up their Christmas to help drivers separated from their loved ones through no fault of their own.”

Army personnel have tested more than 6,200 drivers, while also tasked with distributing food and water, the MoD said.

Traffic was moving smoothly through Dover on Friday, with French firefighters and the Polish military’s Territorial Defence Force also drafted in to help with testing.

Poland has codenamed its operation “Zumbach”, after the Polish Second World War pilot Jan Zumbach, who fought for the allies in the Battle of Britain, the country’s UK embassy said.

Germany’s ambassador to the UK, Andreas Michaelis, said some German hauliers had managed to make it home for Christmas, while others remained in Kent.

He tweeted: “Some of the German lorry drivers we’ve been in touch with are on their way home or at home already. Others sadly remain stuck.

“I sincerely hope things will start moving for them soon. This is a difficult Christmas. Our thoughts are with them.”

Various individuals and organisations have volunteered to help the stranded drivers by providing them with food and drink.

Mubashir Ahmad Siddiqi, 60, and his two 20-year-old sons Qasim and Hamza, from Barking in east London, spent six hours helping to prepare 1,000 portions of chicken biryani on Friday for those stuck in Kent.

He added: It’s a great feeling to be able to help those who are alone at the moment and we hope that through our humble efforts we were able to cheer them up with the food packages.”

HM Coastguard said its teams in the Dover area had also delivered 3,000 hot meals, 600 pizzas, 2,985 packed lunches and 17 pallets of water to those waiting.

Minister for the Armed Forces James Heappey said: “I have every confidence that their hard work and operational expertise working alongside our outstanding colleagues in NHS Test and Trace and Kent Police will see cross-Channel traffic quickly recover from the unprecedented closure of the border earlier in the week.”

Mr Shapps said he had instructed the army to take control of testing and HGV management operations in Kent in order to get “foreign hauliers home with their families as quickly as we can”.

The Government said catering vans would provide hot food and drinks to hauliers stranded at Manston, with Kent County Council and volunteer groups providing refreshments to those stuck on the M20.

There are more than 250 toilets at Manston, with a further 32 portable toilets added to existing facilities on the M20.

About 4,000 vehicles, including 2,000 freight lorries and 1,000 cars, have been cleared for departure at Dover since the border reopened, a port spokesman said.

PA Media contributed to this article

How do I watch the Geminid meteor shower this weekend?