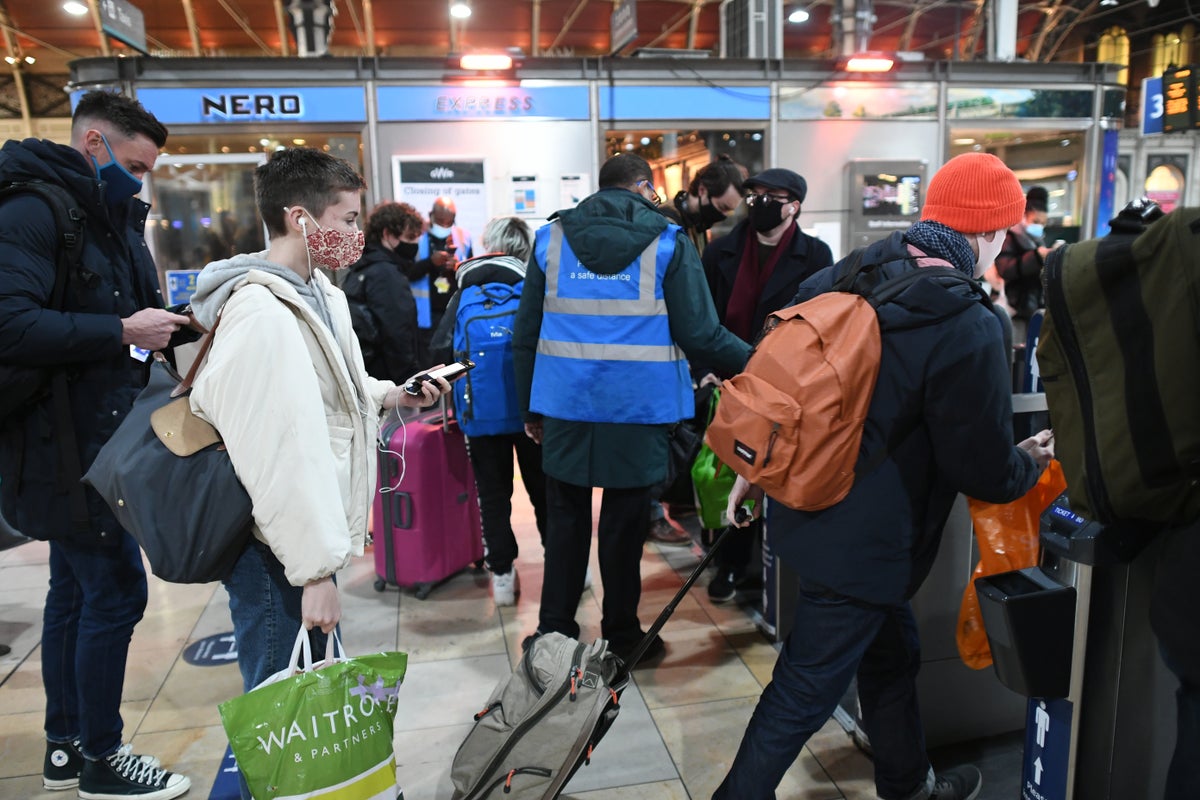 ootage of packed train carriages out of London emerged on social media as many attempted to flee the capital hours before tough Tier 4 restrictions came into force.

The shock announcement meant many were forced to cancel plans to see loved ones at Christmas, while others attempted to escape the restrictions by immediately travelling out of the city.

Travellers at St Pancras station were told that social distancing “will not be possible” due to the volume of people on board, and those that felt “uncomfortable” should not stay on the train.

Tier 4, which is now the highest possible level in the UK, effectively returns residents to the rules in place during the national lockdown.

Mr Johnson told a Downing Street press conference at 4pm on Saturday that the rules would come into effect at midnight.

By 7pm on Saturday evening, there were no trains available online from several London stations including Paddington, Kings Cross and Euston.

Harriet Clugston said that people on board the trains had attempted to secure space for themselves, but that there was not enough room to do so.

“As expected, train is crammed,” she wrote on Twitter.

“Announcement on Tannoy says social distancing ‘will not be possible’ due to volume and to get off if you are not comfortable with that.

“People have tried to secure social distance by placing on seats but being asked to remove them by other passengers as the train is so full.”

Another woman, who did not wish to be named, said she and her partner had made the “split decision” to take their young son to her parents’ home on the coast.

Londoners give thoughts on cancelled Christmas plans and Tier 4

“We just made the decision to leave based on the fact that my parents said come, and we couldn’t bear the thought of no fresh air and a toddler going rogue round a small flat for the foreseeable,” she told the PA new agency.

“We also really just felt we wanted to get the baby somewhere a bit safer with a garden, though we know a lot of people won’t have that luxury.

She added: “The grandparents are just desperately happy they’ll see their grandson.

“We obviously worry about taking something down to them, but they seem happy to take the risk.”

Izzy, 22, from Bristol, said that she wanted “the security of being home for Christmas” and that her parents had come to collect her before the restrictions came into effect.

“I have a slight nervousness that they might block the roads or something stopping me going home,” she said.

“I’m moving out of my flat so I need my dad to come and get me and he feels more comfortable doing it before Tier 4 kicks in.”

Sir Keir Starmer said he was “really frustrated” following the announcement that Christmas would be cancelled for many families across the UK.

“The infection rates are going up very very fast and so something has to be done, and we support the steps the Government has put in place but millions of families are going to be heartbroken by this news – having their Christmas plans ripped up,” he said.

“I’m really frustrated because I raised this with the Prime Minister on Wednesday and he dismissed that and went on to tell people to have a merry little Christmas – only three days later to rip up their plans.

“I think the British public is entitled to more decisive leadership than that.”

But the Labour leader stressed that people should follow the Government guidance of their tier.

“The Prime Minister has a habit of pushing away challenge, of refusing to see a problem until it later confronts him,” he said.

“Lots of families will be saying ‘how was this come about at the eleventh hour in this way?’

“It’s very important that whatever the rules are everybody follows them, so I say follow the Government advice. Whatever tier you’re in, follow the rules.”

Mark Harper, the chairman of the Covid Recovery Group of Tory MPs, called for Parliament be recalled so MPs could debate and vote on the changes.

“This is a very sad day. Lockdowns and increasingly severe tiered restrictions have failed in their goal of slowing the transmission of Covid.

“And now the Government is expecting people to sacrifice the chance to share Christmas with family, friends and loved ones, just a few days after promising the opposite.

“If the Government wants the support of the public and Parliament, it must publish a clear exit strategy from this nightmarish, cycle of damaging lockdowns and restrictions.

“More immediately, given the three-tier system and the initial Christmas household rules were expressly authorised by the House of Commons, these changes must also be put to a vote in the Commons at the earliest opportunity, even if that means a recall of the House.”