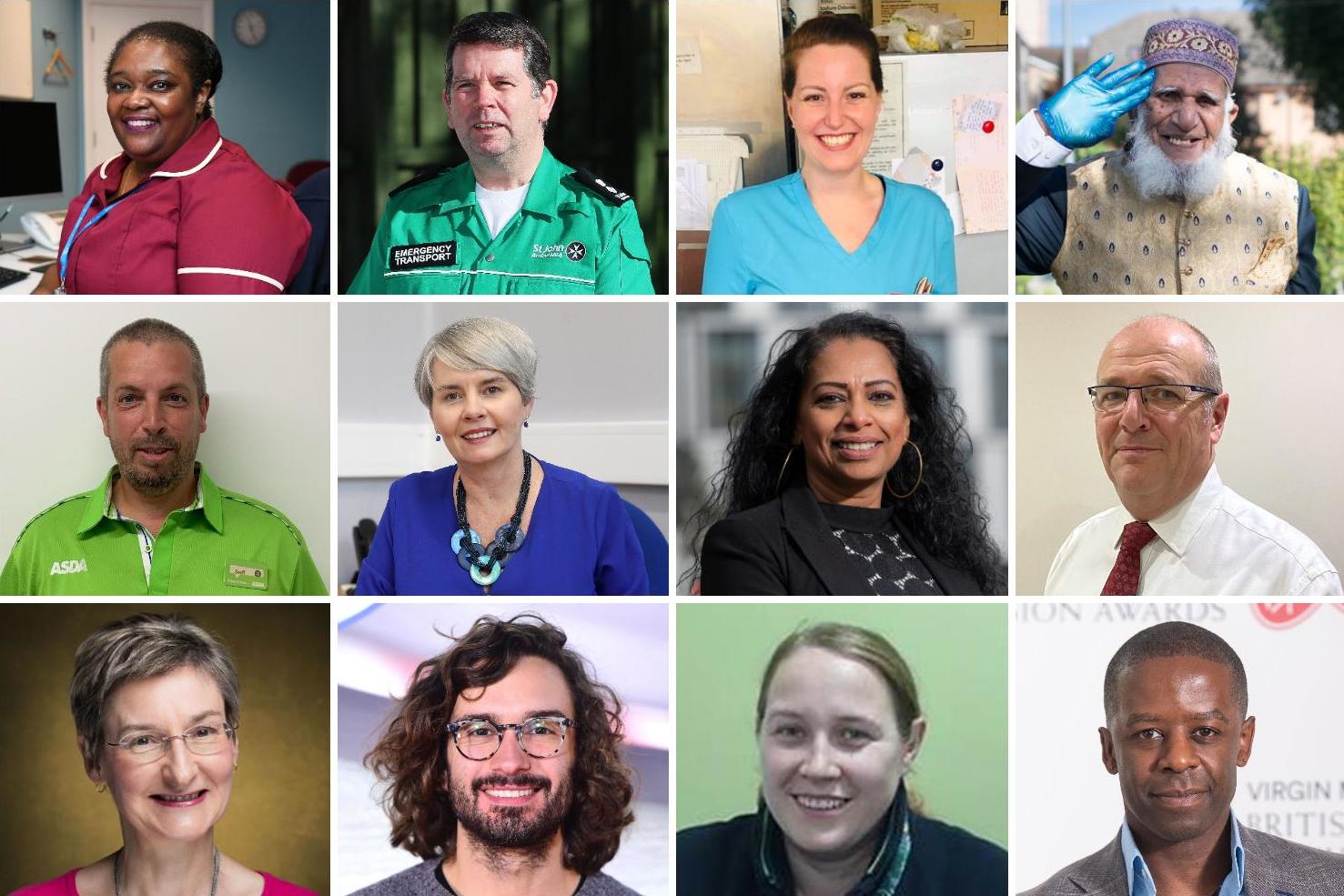 A 90-year-old woman who raised money by climbing the stairs and a nurse who moved into a care home are among the dozens of unsung coronavirus “heroes” recognised in the Queen’s 2020 Birthday Honours list.

Key workers, scientists, and members of the public join famous faces including Marcus Rashford and Joe Wicks in the roll call of those honoured for helping Britain’s fight against Covid-19.

​This year’s list was postponed from June in order to include people, such as medical workers, fundraisers and volunteers, who have been instrumental in the Covid-19 effort.

It celebrates the selfless good deeds of big names as well as ordinary people during the pandemic.

These included delivery drivers dropping off food and medicine to vulnerable people and health workers putting themselves at risk to help their communities and beyond.

Of those who have been honoured, 72 per cent have worked tirelessly for their local community, reflecting the huge voluntary effort across the country in response to coronavirus.

Among them is nurse Lynne Grieves, who moved into a Northumberland care home for 12 weeks to look after residents during the coronavirus lockdown.

She has been honoured with a British Empire Medal for services to nursing during Covid-19.

Margaret Payne, 90, also receives a British Empire Medal for services to the community in Lochinver, Sutherland, after scaling the height of the 731-metre Suilven mountain on her staircase and raising more than £434,000 for the NHS, the Highland Hospice and the RNLI.

Key workers from black, Asian and minority ethnic (BAME) communities are recognised for their selfless efforts in the fight against Covid-19, including Felicia Kwaku, 52, associate director of nursing at Kings College NHS Foundation Trust, who is honoured for her services to nursing.

Miss Kwaku, who is made an OBE, said it is “timely and appropriate” that BAME people are being recognised for their efforts during Black History Month, adding: “You can’t ignore the fact people have laid down their lives during this pandemic. It is only right, proper and fitting to honour them and honour those who continue to serve.”

Footballer Marcus Rashford has been made an MBE after his heroic efforts in ensuring children in need received meals across the summer during the pandemic.

He said: “As a young black man from Wythenshawe, never did I think I would be accepting an MBE, never mind an MBE at the age of 22.

“This is a very special moment for myself and my family, but particularly my mum who is the real deserving recipient of the honour.

“The fight to protect our most vulnerable children is far from over.”

Body coach Mr Wicks is also being made an MBE for helping children keep active and mentally fit during lockdown with his online PE lessons.

“But I’ve turned it around and I really am proud I’ve become this person who’s helping people.”

Hot on the heels of Mr Wicks is Derrick Evans, more commonly known as Mr Motivator, who has been made an MBE after creating online home exercises during lockdown and hosting a week-long workout with Linda Lusardi to raise money for Age UK’s Emergency Coronavirus Appeal.

The television star said he initially thought he was being “scammed” when told of the honour, adding that it was “wonderful to be acknowledged in this way”.

He said: “If only my parents were really here with me now, they would be so chuffed, but I think in spirit they are actually hovering up there and they are saying ‘Boy, you done good’.”

Joining the list of celebrities who have helped with Covid-19 efforts is rapper Lady Leshurr, who is being awarded the British Empire Medal (BEM) after releasing a coronavirus-related song this year reminding people to wash their hands.

“I’ve always held my integrity and it just proves, you know, if you believe in yourself and your craft, and you just work and build, you will be commended and you will be rewarded for your success and what you bring to the universe.”

Earlier this week, news leaked of damehoods for former Great British Bake Off judge Mary Berry and veteran actress Maureen Lipman, best known for her roles in BT adverts in the 1980s and currently in Coronation Street.

Ms Berry, who was made a CBE in 2012, is being made a dame for services to broadcasting, the culinary arts and charity, while Ms Lipman is honoured for her services to charity, entertainment and the arts during her 50-year career.

Ms Berry said she was “absolutely overwhelmed” at receiving a damehood, adding: “I just wish my parents and brothers were here to share my joy, as my only achievement at school was just one O-level – in cookery of course.

“However, I am sure they are looking down and smiling. ”

Meanwhile, another national treasure, Sir David Attenborough, receives an upgrade to Knight Grand Cross in the diplomatic list for services to broadcasting and conservation.

Phil Redmond, the creator of Grange Hill, Brookside and Hollyoaks, has been knighted for services to broadcasting and arts in the regions, while writer and director Sally Wainwright, who has been behind some of biggest television dramas in recent years, including Gentleman Jack, is made OBE.

Ms Wainwright said: “I’m pleased that it’s come on the back of Gentleman Jack because I’ve been working on that for 20 years and, for me, it’s been the highlight of my career to be able to write about Anne Lister, so I feel quite emotional, I didn’t expect that.

“So for it to come on the back of that, for me, has been really quite beautiful actually.”

For services to music, British rapper Dizzee Rascal has been been made an MBE, while hip hop duo Krept and Konan are awarded the BEM.

In the entertainment industry, soap star and singer Mica Paris, who recently joined the cast of EastEnders, is being made an MBE for services to music, entertainment and charity.

In total, 1,495 honours make up this year’s list, with health and social care workers making up 14 per cent while 13. per cent of recipients are from a minority ethnic background, making it the most diverse list after 12 per cent in the New Year Honours last year.

Dabirul Islam Choudhury, 100, was made an OBE after he raised £420,000 for Covid-19 relief while fasting during Ramadan.

Mr Choudhury said: “I feel proud they have honoured me for the efforts I have done.

“I thank everybody from the bottom of my heart.”

Other everyday heroes include Ali Ghorbangholi, 29, and Professor Mark Wilson, 46, co-founders of the GoodSAM app which has helped mobilise hundreds of thousands of volunteers in support of vulnerable shielded people during lockdown.

In sport, former long distance runner Brendan Foster receives a knighthood for services to international and national sport and culture in the North East.

“It is a real privilege to receive this honour,” said the athlete, who was presented with his first medal by the Queen at the Edinburgh Commonwealth Games 50 years ago.

He added: “Since then I‘ve been lucky enough to spend my whole life doing something that I’ve loved from childhood – participating, sharing my enthusiasm through broadcasting and for the last 40 years encouraging thousands to run for pleasure.”

Former Welsh rugby star Gareth Thomas is made a CBE while cricketer Darren Gough is made and MBE.

Several experts working in the science, health and pharmaceutical field have also been recognised for their efforts during the pandemic.

Ms Walmsley said: “I’m humbled to receive this honour. It is a real testament to the many outstanding people we have at GSK and the work we do for patients and people here in the UK and around the world.”

Meanwhile, Tim Spector, professor of genetic epidemiology at King’s College London, who leads the Covid Symptom Study (CSS) app, is made an OBE.

Elsewhere, Tony Gallagher, a multimillionaire property developer who has donated hundreds of thousands of pounds to the Conservative Party and is also a friend of former prime minister David Cameron, is knighted for services to land development and the property business.

British fashion designer Paul Smith, who was knighted in 2000, is getting an upgrade after being appointed to the prestigious Order of the Companions of Honour, joining the likes of Sir Elton John, JK Rowling and Sir Paul McCartney.

The Cabinet Office said this year’s list is the first to have 11 per cent of recipients under 30, with Theodore Wride being the youngest person at 16. He is awarded the BEM for service to his community in Sunderland during the pandemic.

The list includes 740 women, which represents 49 per cent of the total, lower than the 50.7 per cent seen in the New Years Honours list last year, while 6 per cent of people being honoured considered themselves to have a disability.

Prime Minister Boris Johnson said: “This year’s honours recipients are a testament to the sort of country we are – caring, compassionate and resolute in the face of a global pandemic. The hard work and dedication of these local, often unsung heroes has helped carry us through. I congratulate them all.” 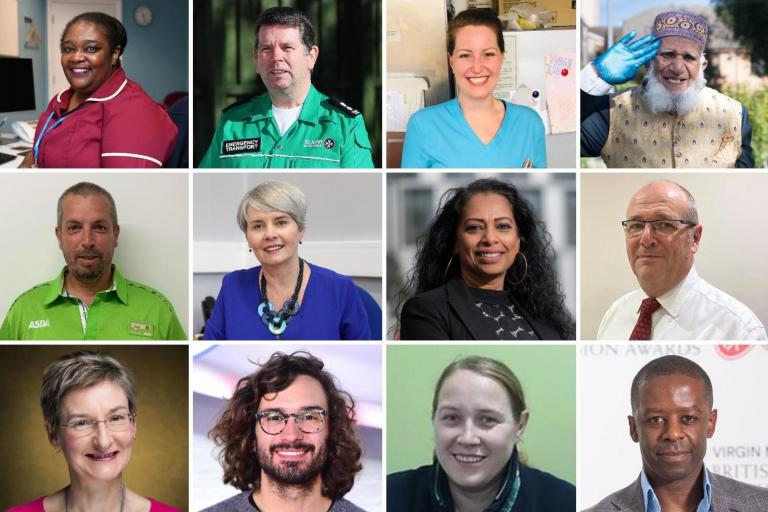