ail passengers were suffering fresh travel chaos on Wednesday when thousands of workers walked out on strike, crippling services across the country.

Disputes in the bitter row over jobs, pay, pensions and conditions are worsening, with more strikes due in the coming days, and a wave of industrial action planned next month on the railways and London Underground.

Only around one in five trains will run on Wednesday, on around half the network, with some areas having no trains all day.

Picket lines were being mounted outside railway stations as members of the Rail, Maritime and Transport (RMT) union at Network Rail and 14 train operators went on strike.

Passengers were urged to only travel by train if they must, and, if it is necessary, allow extra time and check when their last train will depart.

Trains will also be disrupted on Thursday morning with a later start to services as employees return to duties.

The Transport Salaried Staffs’ Association (TSSA) has also announced a strike by its members at Avanti West Coast on Wednesday, while members of the drivers’ union Aslef at seven companies will strike on Saturday.

He told ITV’s Good Morning Britain: “If we don’t make a stand today, people’s lives could be lost.”

Asked whether he expects to be sacked by Sir Keir, Mr Tarry said: “I’ve no idea what Keir will decide to do but I know this – if Keir was in government right now, this dispute wouldn’t be happening.”

Transport Secretary Grant Shapps told Sky News that Mr Tarry’s actions are “clearly in direct defiance of Sir Keir” and “no doubt he’ll want to remove him from his job”.

“Network Rail have not made any improvement on their previous pay offer and the train companies have not offered us anything new.

“In fact, Network Rail have upped the ante, threatening to impose compulsory redundancies and unsafe 50% cuts to maintenance work if we did not withdraw our planned strike action.

“The train operating companies have put driver-only operations on the table along with ransacking our members’ terms and conditions.

“RMT will continue to negotiate in good faith but we will not be bullied or cajoled by anyone.

“The Government need to stop their interference in this dispute so the rail employers can come to a negotiated settlement with us.”

Mr Shapps said in his three years as Transport Secretary there has not been a single day when unions have not been in dispute by threatening or taking industrial action, with around 60 separate disputes in 2022 alone.

“Today, union bosses are once again trying to cause as much disruption as possible to the day-to-day lives of millions of hardworking people around the country,” he said.

“What’s more, it has been cynically timed to disrupt the start of the Commonwealth Games and crucial Euro 2022 semi-finals, in a deliberate bid to impact the travel of thousands trying to attend events the whole country is looking forward to.

“This country’s taxpayers stumped up £600 per household to ensure not a single rail worker lost their job during the pandemic, but many of those very same people will be forced into losing a day’s wages through no fault of their own but because of stubborn union leaders’ refusals to modernise.

“Union bosses will claim they’re willing to do a deal but how can anyone take them seriously when, earlier this month, the RMT dismissed a Network Rail offer worth 8% over the next two years without even consulting their members.

“Unfortunately, it’s too late to call off today’s damaging strikes but I urge the RMT, and indeed all unions, to stop holding the country to ransom with the threat of further industrial action and get off picket lines and back round the negotiating table. If not, we risk passengers turning their backs on the railway for good.”

Writing in The Telegraph, Mr Shapps dubbed the strikes an example of “union collusion”, adding he would seek to ban “strikes by different unions in the same workplace within a set period”.

He said he would also look at implementing a 60-day cooling-off period after each strike, as well as ensuring critical industries like rail maintain minimum service levels.

Andrew Haines, Network Rail chief executive, said: “Despite our best efforts to find a breakthrough, I’m afraid there will be more disruption for passengers this week as the RMT seems hell-bent on continuing their political campaigning, rather than compromising and agreeing a deal for their members.

“I can only apologise for the impact this pointless strike will have on passengers, especially those travelling for holidays or attending events such as the Uefa Women’s Euro 2022 semi-final (Wednesday) and the opening ceremony of the Commonwealth Games (Thursday).”

Steve Montgomery, chairman of the Rail Delivery Group, said: “We are incredibly disappointed that the RMT and Aslef leadership are continuing with this action, disrupting the summer plans of millions – including those attending the Commonwealth Games.

“While we will do all that we can to minimise disruption to passengers, our advice is to only travel if it is necessary, and if you are going to travel, please plan ahead.”

A Department for Transport spokesman said: “It’s now clearer than ever that the RMT has no interest in engaging in constructive discussions and is hell-bent on creating further misery for passengers across the UK.

“This action is a cynically timed attempt to derail the start of the Commonwealth Games, one of the first major events the country has been able to look forward to since the pandemic.“

Members of the RMT and TSSA will launch co-ordinated strikes on August 18 and 20, while the RMT announced a strike on London Underground on August 19. 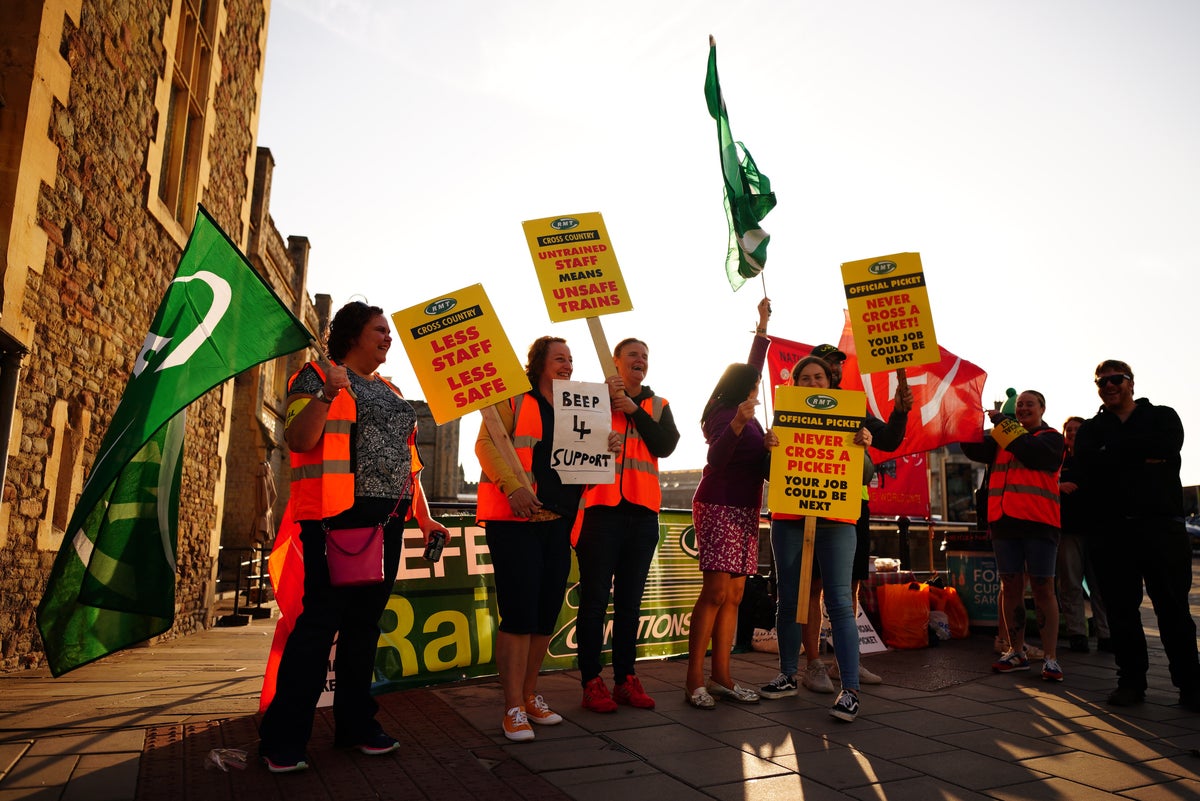