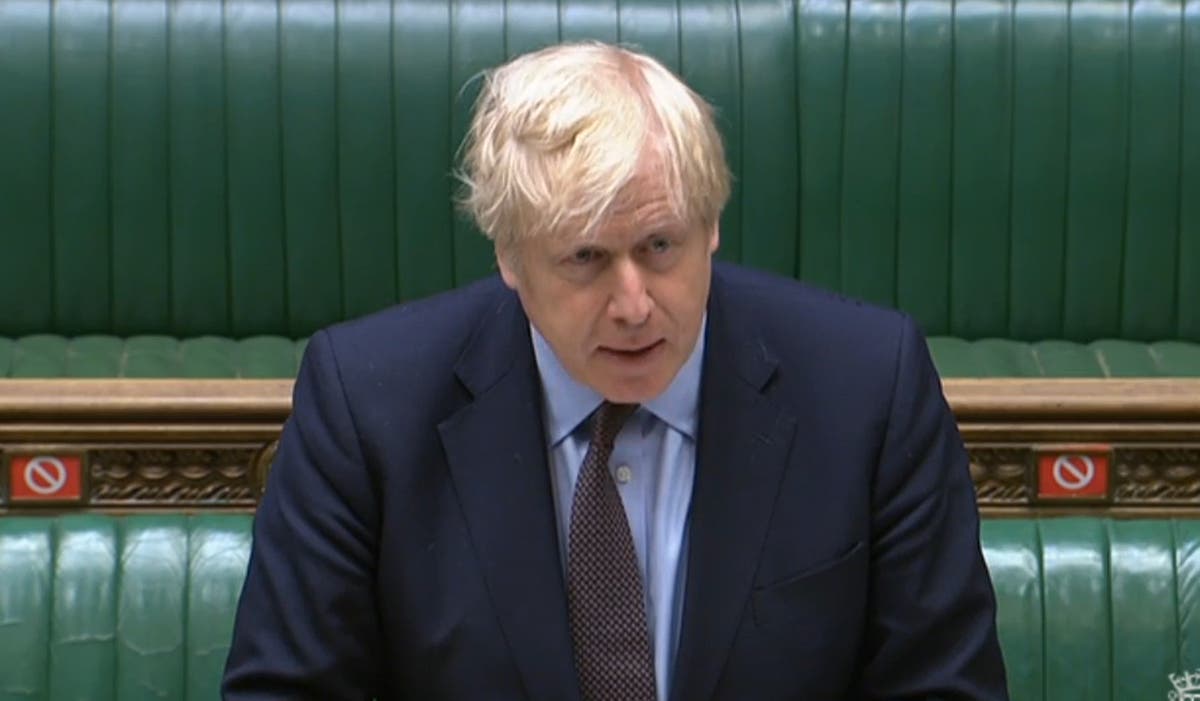 oris Johnson has defended the Government’s handling of Covid at Prime Minister’s Questions as his former aide reveals damning details about the Government response to a committee of MPs.

Mr Johnson said: “I don’t think anybody could credibly accuse this Government of being complacent about the threat that this virus posed at any point. We have worked flat out to minimise loss of life, to protect the NHS, while they have flip-flopped from one position to another.

Dominic Cummings told the Commons Health and Social Care and Science and Technology committees “when the public needed us the most the Government failed”.

He said ministers, officials and advisers “fell disastrously short of the standards the public has a right to expect” in a crisis and he apologised for the mistakes during the pandemic.

He also said Mr Johnson initially regarded Covid as “just a scare story … he described it as the new swine flu,” and that the Prime Minister wanted to get Chief Medical Officer Chris Whitty to inject him “live on TV with coronavirus”.

Labour MP Barbara Keeley, a member of the committee questioning Mr Cummings, tweeted: “The evidence from Dominic Cummings today was clear – at the start of this pandemic, residents in care homes were sacrificed in order to free up beds in hospitals.

“@MattHancock must come explain why the promise that patients would be tested before discharge wasn’t kept.”

Dominic Cummings has been speaking about the infamous trip to Durham and Barnard Castle during lockdown, which made him a household name for many.

He says that in autumn 2019, he had to move out his house for six weeks due to security threats. He claims that soon after his wife called him saying a gang of people were outside saying they would break in and kill everyone inside the house, which was just his wife and three-year-old son at the time.

He says he spoke to Boris Johnson and deputy cabinet secretary Helen McNamara about moving his family into government accommodation at the same time a “fake quote” appeared in the Sunday Times implying he was “happy for everyone to die”.

After that weekend, he said to his wife that they “have to get out of here [London] on the Friday”.

He says: “What happened is because of this, we kept the whole thing very quiet. Almost everyone in No 10 knew about it for obvious reasons.

“We [him and Johnson] agreed to stonewall the story and not say anything about it. I was extremely mindful if you talk about stories like this you make things worse for yourself.”

He claims that by the Monday, the PM told him “this line won’t hold” and says, “at this point I made terrible mistake I’m extremely sorry about, I should have called my wife and said you and my son have to get out of London again”,

He says: “Instead of that, there was a chaotic situation in No 10 where we said we have to do something, did the press conference where what I said was true but left out a crucial part of it all.

“The whole thing was a complete disaster … the truth is when PM said we can’t hold this line, if I had just sent family back out of London and said ‘here’s the truth’ to the public, people would have understood the situation.

The Prime Minister’s former chief adviser Dominic Cummings said that Boris Johnson had told him he liked the “chaos” because it meant “everyone has to look to me to see who is in charge”.

Giving evidence to the Commons Health and Social Care and Science and Technology Committees, Cummings said he told the Prime Minister in July he was going to leave by December 18 at the latest.

He added: “He [Mr Johnson] asked why and I said because this whole system is chaos, this building is chaos, you know perfectly well that from having worked with me I can get great teams together and manage them, but you are more frightened of me having the power to stop the chaos than you are of the chaos, and this is a completely unsustainable position for us both to be in.

“I am not prepared to work with people like Hancock any more, I have told you umpteen times you have got to remove him, you won’t, it’s going to be a disaster in the autumn and therefore it’s time that I should go.”

Cummings says the answer as to whether No 10 took planning for the pandemic in relation to care homes seriously enough is “obviously no”.

He says the PM’s attitude towards who was being killed by the virus became relevant by the autumn but not during the first wave.

Lib Dems call for inquiry to be brought forward

“The Prime Minister must set up the inquiry he promised immediately. No more delays.”

The Government should have paid people to stay at home and isolate if they had Covid symptoms, Dominic Cummings said.

Pointing to the South Korean system, Mr Cummings told MPs it was “a combination of stick and carrot”.

“It’s much stricter in terms of legal things, like you’ll get put in jail if you break the quarantine,” he said.

“But we also will provide food to your door, we will pay you so you’re not financially disadvantaged etc, like lots of things essentially, if we just cut and pasted what they were doing in Singapore or Taiwan or whatever and just said ‘that’s our policy, everything would have been better. I think it’s just no doubt about that at all.”

Away from Parliament, health secretary Matt Hancock – who has come in for fierce criticism for “lying” from Cummings – has been doorstepped by Sky News.

He ignored questions about the evidence given today, instead telling the reporter that over-30s are now able to book their vaccinations.

As Hancock, sporting an England cricket jersey, was asked again about Cummings’ accusations, he simply jogged off into the distance, waving as he went.

Asked to rate the government’s performance throughout the pandemic, Cummings calls it a “total failure”.

When asked to put it in Ofsted rating terms, he agrees it would be ‘Inadequate’ despite some “brilliant individual performances”.

Dominic Cummings said “we left it too long” to set up a functioning test and trace system.

Mr Cummings told MPs the system should have been set up in January but by April, when moves were being made, “the system was hugely distracted” by Matt Hancock’s promise to increase testing to 100,000 a day across the UK.

He said: “The problem is that between January and roughly mid-March, everyone was thinking, ‘well, given we’re doing one single peak, herd immunity by September, there’s no point building up this whole thing’.”

Cummings calls the Daily Telegraph “stupid” for campaigning against lockdown and says Tory MPs were “crackers” for not supporting it.

However, he says the PM was not prioritising tourism over the economy. He says Johnson did query the decision not to close borders.

He says: “From April it was a different story and he was prioritisng the economy.”