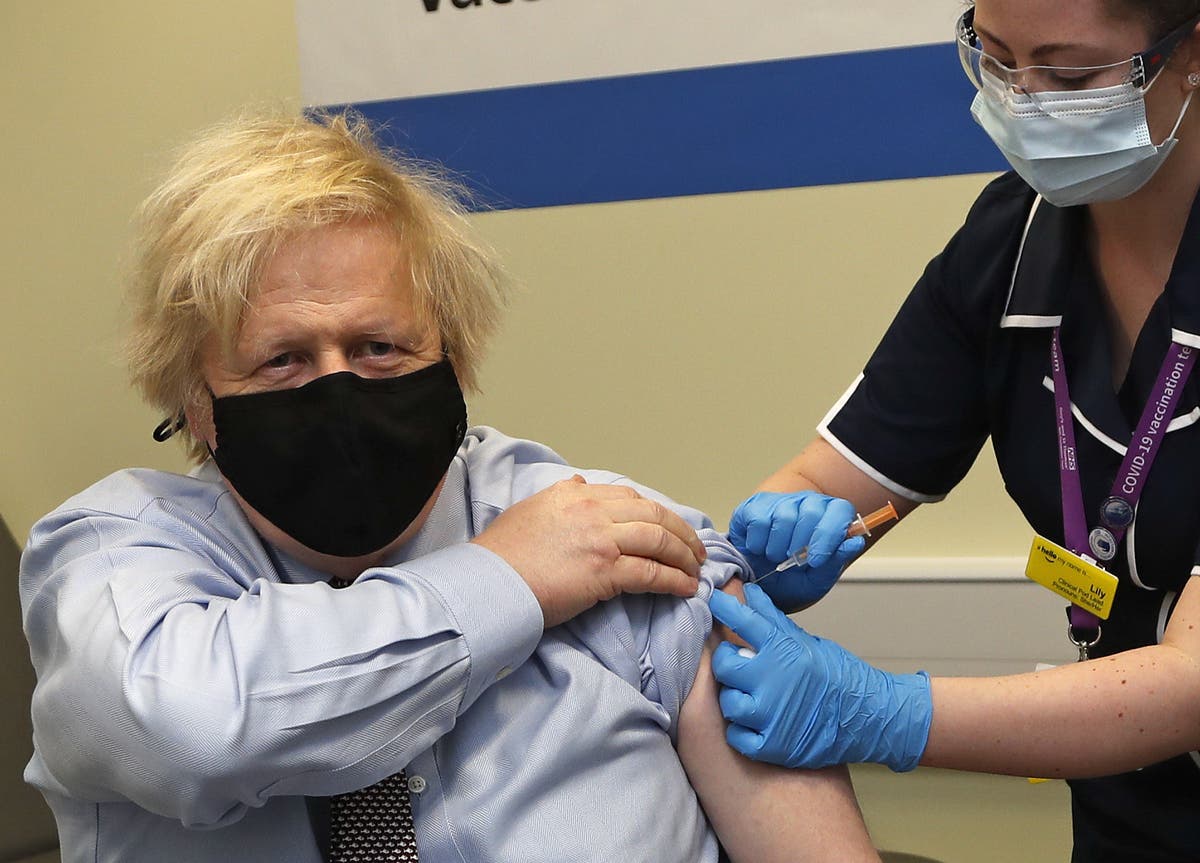 he UK is on the verge of reaching the major milestone of giving more than 50% of the adult population their first dose of coronavirus vaccine.

Government data up to March 18 suggests that 49.9% of the population aged 18 and over have received a first dose, with an estimated 73,000 more jabs needed to pass the halfway mark.

Meanwhile, a rise in coronavirus infections has led to countries across Europe imposing tougher restrictions, with UK scientists concerned about outbreaks of the South African variant.

Mr Johnson gave a double thumbs-up to mark the occasion as he was given the jab at Westminster Bridge Vaccination Centre at St Thomas’ Hospital in central London shortly after 6.30pm.

Leaving hospital he told reporters: “I literally did not feel a thing and so it was very good, very quick and I cannot recommend it too highly.

The Prime Minister had previously dismissed concerns it was linked to blood clots, and told the nation it was “safe” at a press briefing on Thursday.

Mr Johnson was treated in the intensive care unit at St Thomas’ Hospital in April last year after his coronavirus symptoms worsened.

His jab comes as England became the first of the four UK nations to pass the milestone of giving a first dose of vaccine to more than 50% of the adult population.

This is the equivalent of 50.5% of the population of England aged 18 and over, based on the latest estimates by the Office for National Statistics (ONS).

A separate milestone has been passed in Wales, where one in 10 of the total population is likely to have had both doses of the vaccine.

In Europe, the French government announced that new lockdown restrictions would be imposed on Paris from midnight on Friday due to an increase in cases.

Prime Minister Jean Castex said France was facing a “third wave” of the pandemic, adding the new measures will last for four weeks.

Chancellor Angela Merkel said Germany may need to apply an “emergency break” on relaxing restrictions amid a rise in infections.

Other countries, including Italy and Spain, have opted for curfews in a bid to reduce the rate of transmission.

Earlier, Professor Neil Ferguson from Imperial College London, said the UK must keep the South African Covid-19 variant at bay as some European countries reported a third wave of infections.

Prof Ferguson, who spurred the UK’s decision to go into lockdown last March, warned that a group of European countries are seeing increasing levels of coronavirus cases.

“Perhaps more concern for the UK though is that some countries are notably seeing a significant fraction, 5-10% of cases, of the South African variant,” he told BBC Radio 4’s Today programme.

“That is the variant we really do want to keep out of the UK.”

A study published on Thursday by Oxford University suggested that the Pfizer and AstraZeneca jabs could struggle against the South African variant and may end up offering limited protection.

Researchers said the South African variant should be the focus of any efforts to create new vaccines that may be needed next winter.

Prof Ferguson said there are “important decisions coming up” with regards to dealing with variants, including how much the ban on international travel is relaxed.

One way of dealing with variants may be through “introducing testing of people coming into the country”, he suggested, but added: “These are policy decisions.”

Countries including France, Germany and Italy have also began restarting their vaccine programmes with the AstraZeneca jab – reversing earlier decisions to suspend them over blood clot concerns.

The rollout of the AstraZeneca coronavirus vaccine will resume in Ireland on Saturday, the Health Service Executive has announced.

“We will now put in place the updated information and advice recommended by NIAC, and begin rescheduling vaccinations starting with a relatively modest number tomorrow (Saturday).”

The World Health Organisation (WHO) and the UK’s Medicines and Healthcare products Regulatory Agency (MHRA) have said that the jab is safe and have encouraged people to take up their vaccine appointments.

ONS figures also showed that around one in 340 people in private households in England had Covid-19 in the week to March 13, down from around one in 270 the week before.

He added: “The last thing we want is to mark a potential Grand Slam weekend with a surge in Covid cases.”

Other data shows the UK ended 2020 with one of the highest levels of excess mortality for people aged under 65 among countries in Europe.